What do you get when you combine the acting brilliance of Morgan Freeman and Matt Damon, and add to it directing mastery of Clint Eastwood?  INVICTUS! 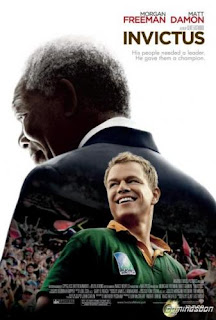 Over the years my husband has brought me along to many sports movies.  He loves them.  They speak to him on some entirely different level than they do to me.  In his youth, he was blessed with the body of an athlete and he excelled at every sport he tried.  His father, Brent Haws, recognized his ability and encouraged his participation and domination.

Because of his background, he relives his "other life" whenever he watches the struggle, the physicality, the mental preparation, and the triumphs of his favorite movie genre.

I don't have the capacity to relate in the same way.  I am the world's biggest klutz.  period.  I can't deny it.  But I do love spending time with my husband, and I find sports movies genuinely entertaining.

INVICTUS is different.  For the first time, the purpose for the struggle transcended the usual desire to win.  Winning is great, and the best sports movies often involve some other personal triumph.  This movie involved something even more important than that.  It involved the triumph of a nation in becoming unifed after the most impossible odds.

What is Invictus?  It is the poem that Nelson Mandela would recite to himself during his years of imprisonment that gave him the courage to press forward, to not resign, to overcome the blackest of times.  POWERFUL stuff!

I would encourage all of you not to overlook this movie.  For some reason it doesn't stand out on the movie rosters.  The theatre was almost empty.  It deserves packed houses and long runs.

"I am the master of my fate.  I am the captain of my soul." My new personal mantra.
Posted by Ardith Haws at 8:28 AM

I loved this movie! I knew a little about Nelson Mandela, but had no idea he had so much character, insight and integrity in the face of change, upheaval and people waiting for him to fail. I also loved the poem Invictus!I left the theater thoroughly impressed by this man. To come through the experiences he had to be the type of person he is ~ wow is about all I can say.

I do love sports movies though which is funny as I'm also not a huge sports fan/player. The character growth in these movies is always inspiring. Have you seen The Blind Side?

Yes, we saw that one too. Great movie! Loved Sandra Bulloch in that one.

We'll have to check this movie out. Sounds great!

I want to see this movie so badly! Every time I saw previews or the clips on shows I get chills. Sadly though I haven't seen a whole lot of movies, but this one is definitely on my next to see list.