Searching for Words and Pictures

Perhaps it was made for a general audience.  But I don't think so.  Perhaps it was intended with that narrower appeal of independent films, for those that needn't be hit over the head with blood and guts and explosives and zombies. One could say it was made for the thinkers.  But that would be wrong.  This movie was made for the "feelers";  those of us that hear words and are moved; those that see pictures and our hearts skip a beat; for those of us who hear music and our own heart-songs find a voice.

I believe it was made for me. 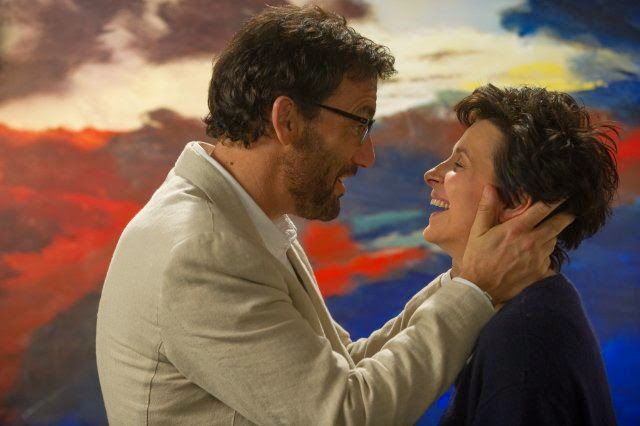 What is it?  It is Words and Pictures.  A subtle, understated film packing some star power with Clive Owens and Juliette Binoche, who are unapologetic about getting older.  Rather than trying to disguise their years, they celebrate that age brings with it depth of experience if not always depth of wisdom.  These are flawed characters. These are relatable people. They are ones that we root for despite their lapses in judgment.

The conflict arises in their pursuit to prove to the other, along with their students at a prep high school, which is more powerful, words or pictures. Taking direct affront to the idea that as a picture is often touted as worth a thousand words, the English teacher seeks to show that carefully chosen words can be just as stimulating as a masterpiece on canvas, if not more so.

So what do you think?  Can a picture speak to us the whole story? Is carefully crafted prose or poetry equally able to articulate what is left between the lines?

Or perhaps we can concede that both, Words and Pictures, can fill us with wonder, with anguish, with joy, with love.
Posted by Ardith Haws at 4:17 PM No comments: