At the recommendation of my daughter, Erica, I went to see a movie she promised me I would love.  I did.  It is one of the most charming movies I have ever seen.  It is refreshingly chaste, focussing on delightful characters and their sweet relationships with one another.  It successfully sells Italy as the most lovely, romantic place in the world.  It is Letters to Juliet.
Years ago I began the hobby of paying attention to movie credits.  I found that there were often stories within stories that could be discovered by a little extra consideration to detail.  Imagine my surprise and delight as I read in the opening credits that starring in the movie was not only Vanessa Redgrave, whom I already was aware of, but also Franco Nero.  I was thrilled!  How profound.  How ironic.  How exciting. 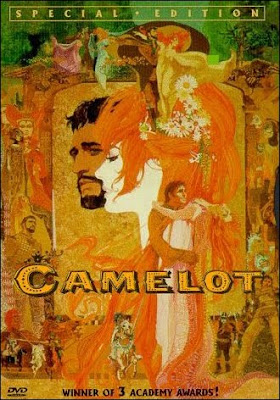 Why, doesn't everyone know that Franco Nero played Lancelot du Lac to Redgrave's Guinevere in the 1968 movie version of the musical Camelot?  I knew it, and had tucked that little tidbit away as a souvenir of arguably the most stirring portrayal of star-crossed lovers ever on film.  I cannot condone their adultery, but I can swoon over their chemistry, their beautiful music, and their contagious agony and heartache.  What I didn't know was that there was even more to the real-life story that I had yet to discover.
The movie stars Redgrave as a woman whose letter expressing regret at leaving her Italian love to return to Britain is found behind a loose brick at Juliet's Verona house, a famous tourist spot and romantic pilgrimage. Redgrave's character seeks out her left-behind love, named Lorenzo, with the help of a young tourist who stumbles on the long-lost letter and decides to respond to it, 50 years after it was tucked behind the bricks.


Lorenzo is played by Franco Nero, and the movie's tale of young love abandoned and then rediscovered after decades echoes his real life love story with Vanessa. The pair met on the set of "Camelot" in 1967, had a son Carlo, and went their separate ways until finding each other again years later,  and marrying in 2006.  As years before, their chemistry is still undeniable, and suggests that time and space are inconsequential as they relate to the connection of two souls; that when heart speaks to heart, little else matters including 50 years worth of wrinkles and gray hair. 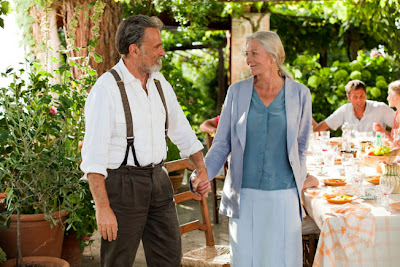 In an interview with Nero about the movie and his rekindled relationship with Redgrave, he recounts some dialogue from Letters:  "She says a wonderful line, 'Sorry I'm late,' and I answer, 'When we speak about love, it's never too late.'" 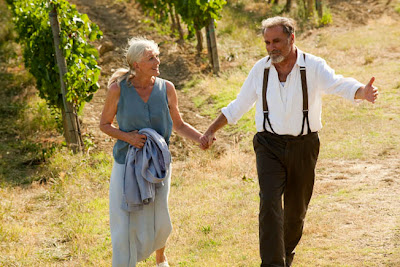 Treat yourself to a sweet gift.  See this movie with someone that won't mind if you have trouble holding in the joy or the tears.  You're welcome.
Posted by Ardith Haws at 8:38 PM

I loved the movie, knew that they were married, but had no idea he was the one in Camelot, which I've never seen *gasp* It's on my list on netflix now!

I'm so glad you enjoyed the movie!!

SPLENDID! Hahaha... that's one of my favorite lines in the movie! I LOVE this movie. I also found out after the fact that those two were together in real life and thought that was cute, but I didn't know that they were together prior or in Camelot. Hmmm... I may have to see this movie. Glad you like it, let me know if you want to see it again. I'm sure Laura and Kim would love to join us. :-)

I looooooooved that movie & can't wait to buy it!
Thanks for the extra movie trivia!