I Nearly Missed a Rainbow

Years and years ago, I had a record album that I played on the portable record player in my bedroom.  It was a collection of music from Sesame Street.  Of course, "Rubber Ducky" was there, "Who are the People in Your Neighborhood" was there, and naturally, "It's Not Easy Being Green" was there.

But there was another song included that I don't think I ever heard sung on the television show, but it soon became one of my favorites.  I think the original Susan sang it; it was melodic, it was beautiful, it was meaningful to me. The song was called "Nearly Missed" and its message reminds us of the beautiful things we might miss if we fail to look up, to look around once in awhile.

During a recent trip to the coast, while enjoying a walk along the beach, I noticed a bunch of people with their backs to the ocean, all bent over and all intently studying the sand.  I can only make some broad assumptions that they were probably looking for something that would bring monetary rewards of some kind and they were indeed working hard. 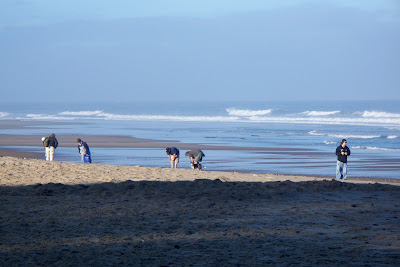 My thoughts as I watched them turned to this song of my youth. Clearly they were so focussed on diligently making a living, on working hard, on being productive, that they were failing to notice the beauty of where they were. 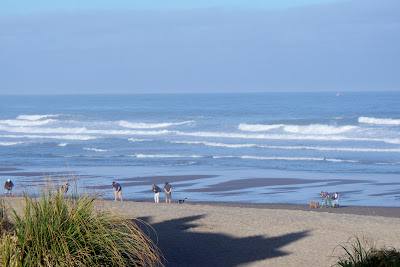 Perhaps the real foolish one here was me.  What were they finding that had so much value, and why wasn't I with them seeking to cash in on the great find?
No.  I don't think so.  I had found the treasure I was looking for.  The coast is therapeutic to me.  Its raw beauty keeps me coming back for more.  The rhythm of the waves is hypnotic and the slower pace reminds me of the way I think God intended for us to live; to slow our heartrate down to meet His tempo; to find the inner peace that often gets pushed to the side, misplaced and forgotten in our rush, rush, rush everyday lives.
A trip to the coast isn't the only time to stop and look up occasionally.  I know in our own little corners of the world there is beauty to be had every day.  Sometimes just the contrast of a striking blue sky against the rooftops and the trees can be breathtaking.
Work is important.  We should not be idle and expect others to attend to our needs.  But we can lift our noses from the grindstone occasionally.  I don't want you to miss the rainbows either. 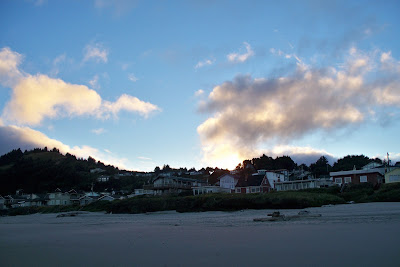 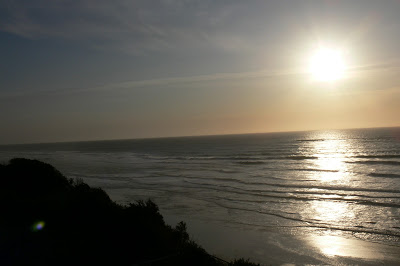 As an aside, I looked this song up on Youtube (which always has everything, doesn't it?). Apparently in 1998 the song was dug up from the Sesame Street archives and redone as a hip-hop version with Rosie O'Donnell and Elmo. NOT the Same!! What a disappointment....
Posted by Ardith Haws at 11:21 AM

How wonderful! The coast has the same effect on me, and tends to slow me down and ground me. I think recognizing the beauty God created gets lost on a lot of us...thank you for the reminder.

people in the west do not knew what is slowness thanks to this hasty era;however, there are still quite places where people move slowly. recently I wrote an article about people living in a Oasis in south Morocco...I want you to read it and knew how those people live far from media and this rushing world.
http://morocco-deserts.blogspot.com/2011/01/mhamid-el-ghizlane-moroccan-oasis-and.html

There is nothing like going to the coast! When we lived in Monterey, Ca. years ago, the waves are strong and crash against the huge rocks. When I was feeling stressed, I'd go there and listen. With every crash of a strong wave it seemed to take some of my stress with it out to sea. It was very good for me and I miss it at times. Enjoy you rainbow ;)

Hi Ardith,
How true, how true. How much of God's wonders we miss when we aren't paying attention. Isn't that what we've always been taught? To pay attention?
Your thoughts and meditations are so beautifully written and inspiring!
Meet your newest follower.
Blessings,
Debra http://debrasblogpureandsimple.blogspot.com

Ardith, We do get so involved in the mundane things that we forget to appreciate the beauty of life. Beautiful post, am following you now. I am at http://sulekkha.blogspot.com/.
you have left a comment on my article on Valentine's Day in Ajnabee.