What do you want your label to be?

I have been fascinated by the new season of Survivor, particularly in watching what happens to people when they have a label attached to them:  Heroes or Villains.  In some ways, the positives and the negatives one would expect are coming to be.  Just watching the establishment of the opposing camps has been a confirmation that we rise, or sink, to what is expected of us.  The heroes have worked together, been willing to work hard, and have shown respect to their team members. Each seems to want to live accordingly to the almost visible haloes that exist over them all.  The music chosen to accompany their work and their walks through the jungle is uplifting and inspiring.
The villains have been content to wallow in the destitution of their situation.  No one is willing to stand forth as a leader; who cares if our shelter is lousy?  who cares if we don't have fire?  Except one.  And this is difficult for me to admit.  I watched Survivor several years ago when we first met "Boston Rob".  I found him arrogant, boorish, and outlandish in his villainry; truly someone that I loved to hate.  Since his first experience on Survivor, Boston Rob has become a husband and a father and has learned a few more life skills, particularly that of serving and supporting his family.  This instinct is coming out, as much as he is trying to squelch it.  He has tried to fight his frustration at the slothfulness and apathy of his team members.  He has tried to fight his natural inclination to step forward as a leader and a "hero".  And it has taken its toll.  Boston Rob found himself waking after a collapse in the jungle surrounded by a team of medical personnel. 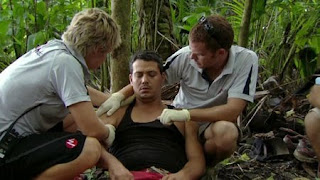 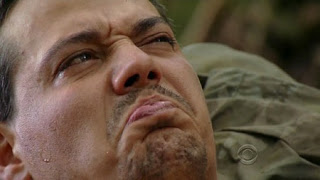 Was there anything more touching than his words to Host Jeff Probst while coming out of unconsciousness? "Sorry.  It's just I feel like it's getting the best of me...and I love and respect it too much to not play."
Well, the thing I like about Survivor is discovering those with integrity and moral fiber.  I'm not saying that Boston Rob is a glowing example of that, but I was able to catch a glimpse of Rob that I hadn't seen before.  He may not be labeled a hero by the producers.  Today, he is a hero in my book.  I'm sure he would not want to hear that though.  Later, when his fluids had been restored and he was back "on his guard", he declared that he must "stop trying to be the good guy".  It is time to "be a villain!"

And what about those other "heroes"?  Well, there is a lot of pressure in being labeled a hero, and sadly, Colby, Tom, James, and the rest fell seriously short.  They are trying to walk the tightrope of acting heroically while at the same time not daring to step forth as a leader, because we all know in the game of Survivor, leaders have a huge target on their backs.

Compelling television.  I encourage you to join me and the rest of America as we watch a fascinating microcosm of our society.  The more things change, the more they stay the same.
Posted by Ardith Haws at 10:57 AM

After watching last night's episode, Katie said "I hate to admit it, but Rob is a stud." We all have expressed similar thoughts. And look at the behavior of James, a "hero." Shameful! Cheers to Colby and Tom for standing up for Stephanie, even though they are in a minority.

I love this show too, I like being the fly on the wall so to speak. Seeing and hearing what they are really like when the chips are down. I too like Boston Rob, he gets better with age and wisdom (but he is a scoundrel that we love).