I had a dream last night.  It was disturbing.  I dreamed that I had abandoned my roots as a band geek, had traded sides and become a choir nerd.  It was very real.
In analyzing my dream, after the fact, I see how my mind may have gotten all mixed up.  All throughout my youth I played the clarinet in school band, beginning in 4th grade just after I had received a clarinet for my ninth birthday.  Three clarinets laters, I was still playing in the band even into college at Utah State University.  I never sang in the choir.  I kind of wanted to, but it never worked out with my schedule to do both, so I stuck with band.
Jump ahead many years and I became a die-hard choir booster when my children were in school.  Not only was I heavily involved in supporting them, I also became the choir tour coordinator, following their high school choir all over the country, including Miami and New York City.
I think in the dream I was processing the betrayal I must subconsciously feel.  In my dream, I seemed to think I had jumped ship when I was a sophomore in high school, foolishly following a dreamy blue-eyed crooner.  Didn't happen.  Weird.
I was so relieved to awaken and remember that I really had remained true to my identity.  Once a band geek, always a band geek. 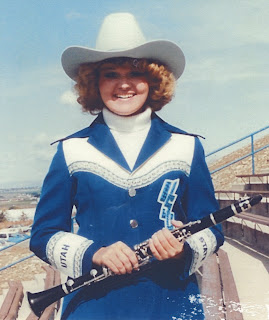 Email ThisBlogThis!Share to TwitterShare to FacebookShare to Pinterest
Labels: Family History, Me, Music

You look so cute in your band getup!

It was fun to hear about your dream, I'm glad that you have stayed true to yourself though. The choir is your extra curricular activity!

I played in band and sang in choir....not at the same time though. I love your picture!!