Pitching our tent toward the temple 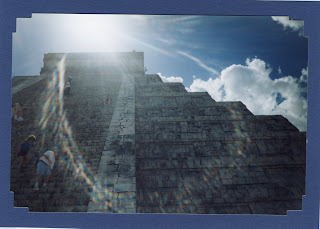 Will you be pitching your tent toward the temple this weekend?  We will be!  I love the visual given in the book of Mosiah, found in the Book of Mormon, of the crowds gathered around the temple to hear the prophet, king Benjamin, address his people and teach them the doctrines of Christ.
"They pitched their tents round about the temple, having his tent with the door thereof toward the temple, that thereby they might remain in their tents and hear the words which king Benjamin should speak unto them." (Mosiah 1:6)

Okay, so maybe we won't literally be huddling together inside our little tent, while the winds blow and the rains pour. And we certainly won't be in Salt Lake City to gather with the saints in the beautiful Conference Center out of the elements.  But that doesn't mean that my family room can't be a sacred place too, with our chairs directed toward the television to watch General Conference, to listen to our prophets and apostles.  And in my family, there can often be found hot cinnamon rolls to reward those who get up early to watch.  I bet they won't be having those in the Conference Center.

I look forward to every time Conference comes around.  It has been a delight to watch my children throughout the years as they have grown in faith.  They were normal children, sometimes getting distracted with other activities, but they were always respectful.  And then as they grew, they eventually found a spot on the couch to sit and listen and take notes (usually without any prompting from their parents).  What a blessing that the Lord sent me children who would be so responsive to sacred things. I have a firm conviction that even though they are all away from home now they will still be found this weekend with their tents pitched round about their television sets, with the door opened toward the temple.

Have you ever gotten a little too comfortable laying on the couch in your favorite spot, oftentimes still in your jammies and have been known to doze off a time or two? I cannot deny this happens to me occasionally.  That makes me particularly grateful that the church follows another pattern from king Benjamin's day:  "he caused that the words which he spake should be written and sent forth among those that were not under the sound of his voice, that they might also receive his words." (Mosiah 2:8)  Thank heavens for the Ensign Conference editions and LDS.org, huh?

It is my hope that I will be prepared (and alert) to receive the teachings of the prophets this weekend and that I won't "trifle with the words they speak, but that (I) will open my ears that I may hear, and my heart that I may understand, and my mind that the mysteries of God may be unfolded to my view." (Mosiah 2:9)

Won't you join me?  I hope you get to have cinnamon rolls, too.  You're welcome to drop by for some of ours, but you might find me still in my jammies...
Posted by Ardith Haws at 9:50 AM

I love general conference! I have to admit we have been lazy about watching it the last few years. Not enough attention given or time. I have always watched GC since I could remember... even going to the chapel until we got it on cable. Thank you for this inspiration. I will have my tent pitched and faced toward the counsel of the prophets... I know I always NEED that counsel!

We're having General Conference cinnamon rolls too.
LOVED this post!

You're so creative in your writing ~ I really enjoyed reading this. One of our favorite conference memories is when Jay had fallen asleep and the person speaking was telling a story and in the story he said the words "Dad are you awake?" We all looked at Jay and laughed because he was totally out! We also love conference but will be having French Toast casserole per Jay's request.