the Rails!  Everyday, as I take Miranda to work, I drive past the beautiful refurbished train depot down on 12th Street.  I see travelers coming and going and wonder where they have been and what played a part in their decision to travel by railway.

Today there was an Amtrak train that was stopped at the station as I drove past.  I was delighted to see that many of the windows were filled with travelers, on their way to who knows where.

I, too, have traveled by train a couple of times but it was many years ago, so long that it is difficult to really connect with that young girl that used to be me.  The first experience was when I was leaving home for the first time, going away to college.  I boarded the train at the station in downtown Portland, Oregon, and after what seemed like time must have stood still, I finally arrived at my destination, a little blip in the middle of nowhere, called Cache Junction, a few miles outside of Logan, Utah.  It was the middle of the night and my heart was filled with every emotion from anxiety to relief, from exhaustion to exhilaration.

The trip had been filled with hours of loneliness.  No ipod, nor even a walkman for company.  I would read for awhile, write my thoughts in a notebook at times, make the precarious journey to the dining car and back again.  I should see if I can find that notebook.  I'll bet my musings would be good for a chuckle or two.  I used to be quite melodramatic,  you know...

My next adventure by train was much different.  This time I traveled with my new husband to go back home to Oregon for Christmas.  I wasn't lonely that time, and we chose to travel by train to avoid the snowy roads of winter.  We were poor college students and had to travel in the coach class.  We imagined how luxurious it must be to be able to afford passage in a sleeper car.

I think someday I am going to travel again by the romantic railways.  It will of necessity be when I am no longer in any hurry to get where I want to go.  It will be somewhere carefully chosen for the beauty of the scenery along the way.  I would love to have a companion along for the journey, but in this day and age of laptop computers and every kind of portable media, the isolation would be much easier to endure.

AND, the most important change would be that I would definitely book a sleeper car.  How does that sound?  Pretty great, huh? 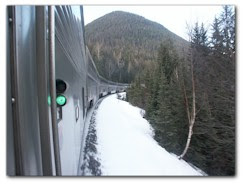 Email ThisBlogThis!Share to TwitterShare to FacebookShare to Pinterest
Labels: Me, trains, Travel

I took a train once from Boston to Maryland and it was fun, I agree about the sleeper car though, that would be so fun!!

I've been on a train only once, it was from DC to New York. I'd love to go on one again. Maybe I will..

Ivon and I took a train from our old duty station in Long Beach, Ca. to Utah and Oregon before we were to leave for a new duty station in Hawaii. We went coach too and were very poor. A nice memory to have. I'm always talking about a train ride, maybe through Alaska ;-)