So Today was MY turn! 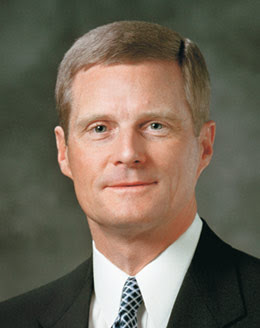 Yesterday I was feeling left out.  My husband attended a 4 hour meeting, being taught with other bishops in the area, at the feet of a modern-day Apostle.  That is a Capital "A" Apostle.  One of the men I admire most.  Elder David A. Bednar
Then later that evening my daughter Miranda was able to attend a special conference given by Elder Bednar for the Young Single Adults in the Region.  Lucky girl!
Today, in one of those unexpected turns of blessings from heaven, I also had the overwhelming opportunity to be in the presence of one of the Apostles of the Lord Jesus Christ.
Just before we were to begin preparing for the Sacrament by singing a hymn, there was some type of rustle in the hallway, to which the bishop (Brian) was called out for.  He came back in with a look that only a wife can recognize as "Something BIG is up!"  It was then announced that instead of having the Sacrament, we would just remain quietly in our seats for a few moments.
What?!
Being seated up front by the organ, I looked out at the congregation and saw the bewilderment to match my own on everyone's faces.  I worried that something was seriously wrong.  I wondered if we were in some type of lock-down.  What could possibly be happening?
About five very long minutes later, the side door of the chapel opened.  Our bishop and our Stake President, who just happened to be visiting our ward today, both stood and looked toward the doorway.  In walked Elder Bednar, followed by our Area Seventy Elder Brinkerhoff.
Imagine the hush that came over the members of the Pringle Ward today.  It was a most extraordinary event.  The feelings are indescribable. The special spirit was palpable.  Elder Bednar then spoke to us, bearing testimony of the reality of God the Father and His Son Jesus Christ.  He gave his special witness as one of the Lord's Anointed, that the Savior truly lives and loves us.  He pronounced an apostolic blessing upon all the children and youth in attendance that they would always remember the special feelings they were experiencing today and that a seed of faith was being planted in their hearts.
I recognize that this is probably a once-in-a-lifetime experience.  I will never forget this beautiful September day when our Sacrament Meeting was blessed with a very special surprise guest.
Posted by Ardith Haws at 6:49 PM

It was incredible ~ I am still in shock!

Oh, how sad I am that we were not there! What a wonderful experience.

Thanks for sharing such a sacred event.

That is just too cool!!

You got to see him after all!! Mike and Sarah were still on cloud nine at family dinner last night. They were thrilled and said the spirit was so strong in the chapel. What a special Sunday that everyone there will always remember.