Can you say Tsunami?

I can hardly spell tsunami, and yet that word impacted my Hawaiian Holiday in a big way.

The flight over was uneventful (yeah!)  All was going as planned.  Perhaps that should have tipped me off that something big was around the corner.  We arrived Friday night, took a taxi to the Marriott on Waikiki Beach.  Beautiful room, beautiful place, beautiful bed.

Abruptly awakened by the pounding on our door at 5:00 am; it was Walt Myers.  It was former police chief, Walt Myers, saying we needed to get a car and move to higher ground.  What?!  When Walt is concerned, I am concerned.  We quickly dressed, trying to wrap our minds around this turn of events, and proceeded down to the lobby of the hotel to learn more about the situation.  It is all a little hazy from this vantage point of a week later.  We learned that an earthquake in Chile had sent a rumbling and a disturbance in our direction; a series of tsunami waves which were due around 11:00 am.  We learned there would be a vertical evacuation for all the tourists on Waikiki Beach.  Everyone would be moved to the third floor or higher.  Immediately our concern became personal.  Our reservation was only for one night.  If the worst happened, would we have a place to stay?  Marriott reassured us they would not kick us out.  Then our thoughts turned to food and water.  There was a breakfast buffet on the first level of the hotel.  Who knew what would be available later.  We went to the buffet.  I had no appetite.  I was trying to get hold of my family on the mainland, to connect with them before they heard the news and worried about us.  I knew I should be digging into what may be my last real meal for awhile.  I ate some pineapple...

The morning was filled with phonecalls, trying to find water to stockpile, looking out to sea, envisioning what would be seen, imagining the beauty being transformed by an angry ocean.  Our room was on the 12th floor, in the so-called safe zone of our tsunami-safe hotel.  My children were skeptical when told we were being placated by this ambiguous term.  Just what does "tsunami-safe" mean?  Why would we trust anything so seemingly contradictory as that? 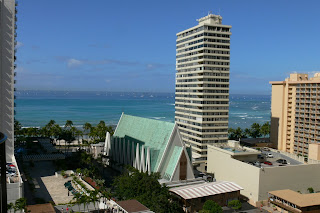 Out on the balcony of our room in our tsunami-safe hotel, we had the perfect lookout spot to watch the impending drama that the scientists were telling us was sure to come. We watched and listened as police cars and fire engines drove by with their sirens and bullhorns warning people to move to safe zones.  Our natural inclination was to find a car and drive to the mountains.  It felt odd to just stay put and wait for the high waters to come where we were. 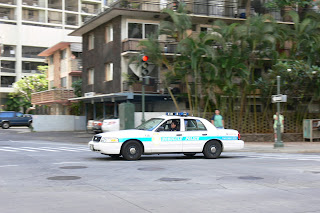 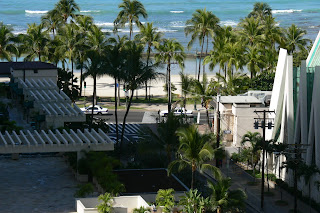 A few rogue surfers refused to run, preferring instead to claim bragging rights of riding the big wave in. 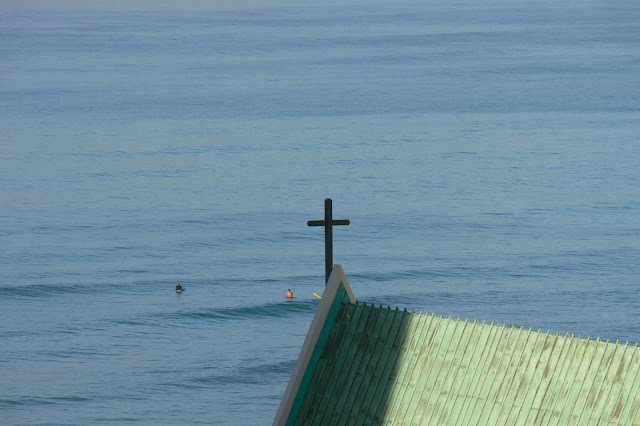 The projected time came and went with little more than some visible withdrawing of the waters.  Reefs were uncovered, leaving us to anticipate the subsequent resurgence of the high waters.  It never came.  The safety we had prayed for continued with only our peace of mind being the victim that day.
Later during the week, we noticed that "Tsunami Survivor 2010" tee-shirts began popping up.  I kind of wanted one, too.  Granted, the threats never came to fruition for which we were very thankful.  Yet our friend (nemesis), the tsunami, continued to inflict its nuisance all during the week of our stay, certainly qualifying us as survivors of the tsunami that never really came to be. 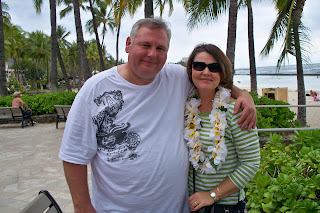 Join me this week as I continue to chronicle our adventures in Hawaii.  When our safety was threatened I realized in a small way that life is meant to be lived to its fullest.  As I realized that sometimes plans must be changed due to circumstances beyond my control, I learned a much-needed lesson to adopt the island lifestyle and go which ever way the "waves" choose to take me.
Posted by Ardith Haws at 9:07 AM

I'm glad you didn't get to experience the tsunami they were predicting, it's so much better to error on the side of caution. Everyone here was praying for you and your safety! Aloha and welcome back!!

What a way to start your tranquil vacation. I am so glad that nothing came of the tsunami.

Aloha! I'm doing a bunch of screen printing on the 20th, I'll make you a shirt! Glad you're safe & able to enjoy your vaca!

You are going to have the BEST vacation stories to tell your grandchildren and great grandchildren.
I'm SOOOOOO glad you guys are okay, but it does make for awesome story telling! You got to see the sweet Hawaiian people, villages, beautiful beaches, delicious food AND excitement and adventure lurking around every corner.
As the years go on, you can leave the stressful parts out and say that the surfers in the photo were you and Brian and no tsunami warnings scared you, you were the rogue surfers ready to ride the untamed waves.... I think it would be great! I'd listen to these stories with bated breath. I can hear it now, "my grandma and grandpa are rouge tsunami surfers" they'd hands down win every "my grandparents are better than your grandparents" debate. :-)