If Music Be the Food of Love, Play On

I attended an evening devoted to the composition talents of a brilliant lady in our church community.  It showcased her work from a lifetime devoted to obeying the instinct to create with inspiration.  The simple, yet eloquent messages were elevated to soul-stirring by the accompaniment of beautiful music.  It was an important reminder of everyone's potential and capacity.  There lies within all of us the divine nature of creativity, which we can either tap into by listening to our hearts and minds, or we can let it remain dormant while the world suffers from one less masterpiece.

But creativity isn't merely about the result, it is about the things we learn and discover during the creative process.  We begin to open our eyes to the possibilities, to see things in new ways, to understand ideas on a higher level.  Then the one who truly benefits most is the courageous soul willing to take a chance to make something beautiful out of ambiguous puzzle pieces which no longer remain ambiguous.

But the end of the concert last night wasn't the end of my profound experience.  My husband and I came home, settled down to relax in front of the television, forgetting to spring forward our clocks.  We became engrossed in the Silver Anniversary Concert celebrating the timeless musical, Les Miserables, which was airing on PBS.  The familiar music spoke new notes to my hungry soul.  As I listened with new ears, the power and glory of this great work continued to swell my heart.  I was overcome with the eternal truths which were taught in this story of sacrifice, integrity, mercy, and love.

Perhaps the biggest surprise for me was the "new" Marius.  At first I was startled by the extremely young nature of this fellow, having been used to stronger, more mature voices whom I have heard in the past.  But as it progressed, I realized that the producers had gotten it right.  There was a stronger note of innocence, of fragility, of promise, of hope in the future.  As ValJean pleaded with the Lord to "Bring Him Home", we all were pleading the same prayer.  He was so vulnerable, so young, so innocent, and yet his heart was so "full of love", we could all identify with those same poignant feelings.

Imagine my surprise when it was brought to my attention that the new Marius was one of The Jonas Brothers, Nick Jonas.  Of course his wasn't the strongest voice in the cast, but his wide-eyed innocence filled the role with grace. 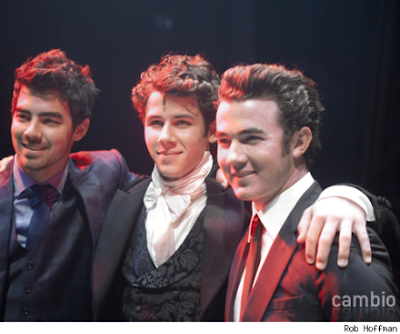 Towards the end of the concert I looked up at the clock and was startled back to reality realizing that what was a late night for me anyway, was turning into even an even later one as I set the clock forward one precious hour.

But some things are worthy of the sacrifice.  My heart was full of love, too.  It was bursting with love for my family, for my Savior and His mercy, for the gift of music in my life, and for powerful literature that captures life and transcends it out of the gutter and onto a higher plane.

Every day should be so full of light and truth.
Posted by Ardith Haws at 8:58 AM

I'm dying to see the 25th anniversary special! I caught a behind-the-scenese feature and in it the main guy said he finally got the movie rights so we should be looking for that in the next year or two! I LOVE Les Miserables! Every time I watch it I get chills from the opening note, I get so involved that I ball. Yes, music is very powerful.

On another note, during the "Look down" song and after the line "sweet Jesus doesn't care..." am I the only one that always thinks "No, He does care! He really does!"

I'm sure you already know this, but I thought I'd let you know just in case. Les Mis is coming to Portland in August. :-)

Les Miserables has been a family favorite of ours for years too. Once you start watching you can't stop! Other great lessons taught are repentance and forgiveness, or the lack of it anyway. It can destroy your life when it's full of hate. Hate is all consuming...

I wasn't able to make it to Judith's program. No doubt it was unbelievably amazing.