Are We Really Any Different Now?

If you take two little eight-year-old girls, both with blonde hair and big brown eyes, who were inseparable, who only lived a short bike ride from each other, who thought alike and dreamed alike, and then separate them for forty years, can you really expect them to still be friends?
I would suggest that Yes! whatever brought them together as children, whatever bond was fortified between those two kindred spirits as children, that same kinship and love never goes away.  I know this as fact, not merely speculation.  It was tested just today, and proven.
I got a phone call from a number I didn't recognize.  Rather hesitantly I answered.  After one simple introduction, the hesitation turned to marvel, which turned to happiness, which turned back to marvel again.  Could it really be my friend, Karen, from Lander, Wyoming?
We spoke with the ease of friends that had never parted.  We caught each other up on the last forty or so years as though that time was merely incidental.  And apparently it was, because the connection that had been there as children continued as strong and clear and evident as ever.
She remembered my married name was Haws.  She googled me, and found my blog.  Life continues to be a wonder and a blessing.  Friendships are timeless.  Our defining personalities, our souls, which we squeeze into little bodies, obviously do not change all that much over time, even as those same bodies grow bigger and older (and fatter and wrinkled).  We like to think that we mature and grow and develop into outstanding members of society.  Apparently we are really not all that different from when we were young.
Thanks, Karen, for the lovely reminder.  And here is that newspaper clipping that I have treasured all these years, saved as my only tangible memory of that special time. The intangible memories, held tightly in my heart, have never faded.  Now I have a new facebook friend and the promise of another special friendship rekindled. 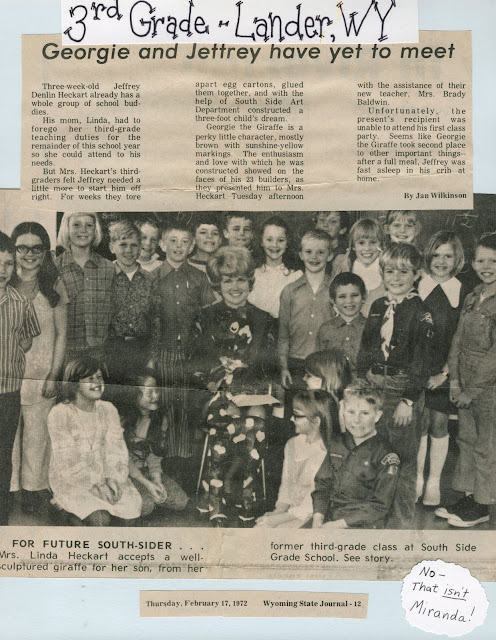 Email ThisBlogThis!Share to TwitterShare to FacebookShare to Pinterest
Labels: Friends, Me, Memories

Lovely post, Ardith. Love that our souls don't change at all and friendships are timeless. i believe so too.Thanks for making my day with your sweet post.

wow. what an amazing story of two friends reuniting! and that newspaper clipping is classic! i love when you see / chat with old friends you really can snap back into your old selves and catch up. this makes me want to call up some of my old besties.

That is so awesome! I'm so excited for you!