Just Can't Talk About It Yet

So much has happened since I wrote my last blogpost.

But I just can't talk about it yet.

The emotions are too near the surface to write about the sweet farewell with my father.

I should record the poignant midnight visit in the ICU when my father found an untapped reservoir of strength that enabled him to sit up in a wheelchair for a meaningful stroll through the quiet corridors; that enabled him to express what was in his heart, though the words were difficult to get out; which also enabled me to tell him the things that were in my heart.

But I can't talk about it yet.

I should write about the following day when this last rush of adrenalin led us to think that Dad had hope for recovery, leading us to tour endless care centers, walking miles of hallways filled with sadness, searching to find a place where Dad wouldn't be too miserable.

But I can't talk about it yet.

Because the following day, when the adrenalin had fled, my poor sweet father could only speak with his eyes as he gratefully welcomed the ice chips that I spooned into his parched lips.

I can't talk about the ride to the airport, thinking, wondering, praying, hoping that he would hold on for a few more days when I would be able to come back, feeling like I was abandoning him.

I can't talk about the scene I created at the airport gate when, just before I was supposed to board, I got a phone call that he had become unresponsive and all the indicators had severely dropped and my hope of seeing him alive again shattered.

I should talk about the beautiful funeral.

I should talk about the lovely music which filled our hearts with the hope of the Resurrection.

I should talk about the sweet reunion with dear friends and cousins and aunts and uncles who had come to honor this great man, who had blessed all of our lives with his wisdom and his strength and his unfailing support and love. 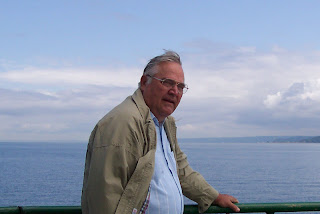 But I just can't talk about it yet.

i can relate a little to your your heart ache. I missed my grandmother's death by 10 minutes. And it still haunts me to this day. Every time I think about that day, questions and thoughts enter my mind - I shouldn't have left the house. If I would have gone down the other street, I would have made it home faster... And then when people, who are trying to make me feel better about it, tell me that there must be some reason I wasn't meant to be there, it pours salt into the wound. I'm sorry I don't have any advice to share about the situation.

All the strength you need is within you now. It was put there by your Creator, who new very well what you would face in this life and made you equal to it.

I am so sorry to read of your loss. I can so relate to it all. In fact your story sounded so familiar. Sending prayers and wishing you the comfort of the spirit.
My father passed away 11 years ago and my mother 6 years ago and I still think of sweet memories all the time.
Hugs!

Ardith: I don't know you, but am a quiet blog-stalker of yours. I just want you to know that I am praying for your peace and healing, and am confident that your dad is at peace and free of the discomfort and other bindings of this world.
Elizabeth

Just happened to chance upon this and it struck a chord in my heart for you, your family and your Dad. I looked at his picture and saw a man who had lived a lifetime and left behind a legacy of love that is enduring and that counts for so much. Their being enriches the world and their is no greater legacy than that. We can only be grateful and celebrate the fact that our lives were fuller and happier for their presence.