Standing As A Sentinel 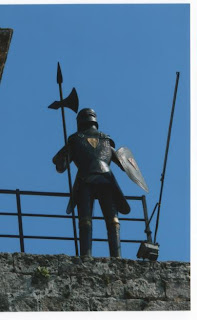 It would seem a rather lonesome job. A sentinel often stands alone, always at the ready; to watch, to guard, to raise a voice of warning.

A few years ago I had the amazing opportunity to visit a part of the world in which my husband and I witnessed a startling juxtapose.  It wasn't where one would expect to find knights in shining armor standing as sentinels atop fortress walls, but there amid the beauty of the Aegean Sea where it flows into the Mediterranean, we found this anomaly.  We found Rhodes, one of the splendid islands of Greece.

Perhaps many already know of  its unique history, an amalgamation of mythology and legend, but I didn't. I was startled to see that along with the expected sandy beaches, jagged cliffs, lush mountaintops, and ancient ruins of Greece, we found the astonishing preservation of medieval fortresses, a lingering tribute to the Knights of the Order of St. John of Jerusalem that came during the time of the Crusades to protect against Turkish invaders. 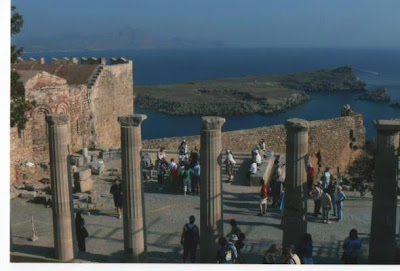 I have been reminded recently that among the many roles and responsibilities of parents, there falls a supreme accountability as sentinels for the family, as guardians upon the watch tower to be ever vigilant and faithful in protecting and giving a warning voice when necessary against the challenges and dangers of the world. 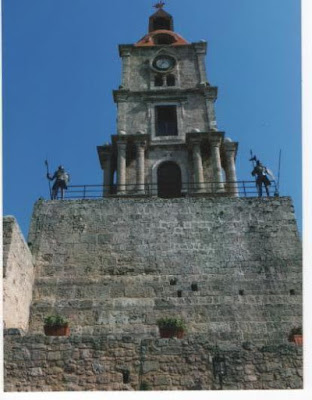 When those once-protected children leave home to make lives for themselves, does that role as watchmen upon the tower diminish and fade away?  Often that is how it would seem.  I recently read a reminder that put things into perspective for me:

"...at times the sentinel misses the essence of his existence.  To man the outpost, it is not.  Maybe rather it is to pen the revelations found in the solitude of introspective adventure." 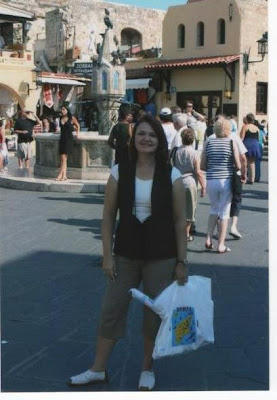 This old knight sometimes gets a little rusty and weathered from being left out to stand alone in the rain, but perhaps my job is not to merely "man my post", obediently, quietly, solitarily.  As I watch ever-cautiously, maybe I can use my enhanced perspective gained from extra years of living to be the watchman on the tower, and those long hours standing alone need not be wasted.  I can be a much more effective sentinel if I use this time to study and learn and grow and fine-tune myself.  Then I can be better prepared to teach and counsel and advise and warn of dangers ahead.

And I am certainly not alone.  I am aided by others who are brave enough to share their insights and discoveries.  Let us unite together and look out for one another.  I will not desert my post, and I will try to learn something while I am here.  And if I happen to gain any enlightenment, I will pass it along.
Posted by Ardith Haws at 1:40 PM

I like it! Feel free to send some enlightenment my way anytime! I could always use some more.

Thanks for an insightful post. I feel just like you that being a Mother or Father never ends and it helps to be prepared for the moments that our children come to us in need.
Love the pictures and the history.
Blessings to you!

"I have been reminded recently that among the many roles and responsibilities of parents, there falls a supreme accountability as sentinels for the family ..."

Wow. This is just so true. My oldest graduates from high school next year, so I'm thinking a lot these days about how my role will change in 12 months. Thank you for these insightful words. So timely.